Stop by the Visitors’ Center for a brochure or download a copy here.

R6. Ocmulgee River – Historic Marker is on Georgia Highway 16 at CR170 in Jasper County – 3.8 miles West of the Courthouse Square

R7.    Hillsboro – Birthplace of U.S. and later Confederate senator Benjamin H. Hill, it was headquarters for the Federal 15th Corps the night of November 19, 1864, including for “Right Wing” commander, General Howard. The entire Right Wing passed through Hillsboro between November 19th and 21st.   GPS: 33.1768, -83.6392 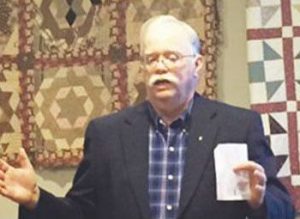 The Jasper County Historical Foundation presented some little known history of General Sherman and the Civil War at the fourth of their yearly open meetings last Thursday at Thomas Persons Hall.

Larry Smith, a Monticello native and Civil War historian, was the featured speaker and shared some fascinating stories, not only about General Sherman but stories of some Jasper County families who were affected by Sherman’s Army in their path of destruction on their way to Savannah. This path was known as “Sherman’s March to the Sea.”

Smith, who lives in Smithboro, remembers asking his grandmother about General Sherman, after graduating from UGA with a degree in American History and he was promptly told to ‘hush up’ because that part of history just wasn’t discussed openly.

It is now the 150th Anniversary of Sherman’s March to the Sea via Jasper County, and Smith has become known for his extensive knowledge and research of the infamous General and some of his idiosyncrasies.

He revealed that Sherman’s early life showed he was split from his very large family and was sent to live with a family member who was a politician. He attended West Point with a military career in mind. At the beginning of the war Sherman was second in Command at a post in Kentucky but suffered a nervous breakdown while there and was relieved of his post and sent home to rest.

Sherman, who had been dubbed crazy, was known to say of his nemesis General Ulysses Grant, who he developed a close friendship with, “he stood by me when I was crazy and I stood by him when he was drunk.”

While in Atlanta, Sherman started planning his next move. Little did he know that President Jefferson Davis and Major General John Bell Hood met in Macon to decide what to do to get that crazy Sherman out of Atlanta! Sherman’s first plan was to go to Alabama and he wanted Hood to go in the opposite direction, to Tennessee, and be completely out of his way.

While preparing his men for their trip to Savannah, which was his second plan, Sherman heard that Hood was indeed headed toward Tennessee and he then ordered his left wing to travel through Covington and his right wing would head toward McDonough. Both wings were ordered to arrive in Milledgeville in seven days. They arrived in six.

Sherman’s army was huge and included an estimated 20,000 horses and 5,500 cows. His men all liked him and thought he was smart and knew everything, although Sherman secretly admitted he ‘really didn’t know it all.’

His plan was to travel to Savannah by way of Jasper County with the intent to bring the war up close and personal to the people living in the rural areas of the south. He planned to enforce the ‘shock and awe’ strategy and cause the people to surrender by sheer force. He dispatched his 14th Corps through Jasper County – through Newborn, Farrar and they ended up camping out in Shady Dale where they watered their horses and themselves at the well which still stands across from Shady Dale’s City Hall.

Both the 17th and 15th Corps went through Jackson where they burned the Courthouse, fortunately the Butts County records were saved and were hidden in the woods in Jasper County. The 15th Corps ended up heading towards Hillsboro and a rumor had the 17th Corps believing there were Union soldiers being held in the jail in Monticello, so they burned down the jail.

The answer to the question of why Sherman’s mission chose to adopt a burn and destroy as his legacy lies in his theory that this would bring about a quicker end to the war. He wanted people to know and feel the pain and suffering of war. The State Militia recruited old men and boys to help with the war effort and that left only the women and young girls the task of struggling to maintain the farms and plantations.

History records report that as a young child Mr. L.O. Benton Sr. remembered barely avoiding being trampled by soldiers’ horses as they marched through Monticello. Jasper County’s history is replete with these types of war stories, and deserves to be told. Perhaps a filmed oral history from some of our living historians would make a great project….

Others who helped Mr. Smith with the presentation included Benny Hawthorne, Walter Harrell, and Phil Jones. 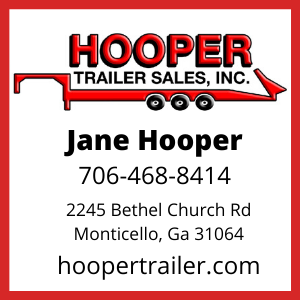