Business of the Year

» Chamber News » Business of the Year

The Monticello-Jasper County Chamber of Commerce announces the Business of The Year at their Annual Meeting each year.  Nominations open in December and the recipient is announced in January (at the Annual Meeting). 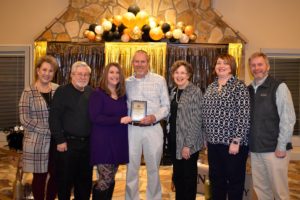 Loree Selman and Cory McMichael presented the Business of the Year award. Mr. McMichael noted that this year’s honored business has been operating locally since 1986 and that the owner and the employees have been so important to the county and Monticello Kart Racing (MKR).In accepting the Business of the Year Award owner Brad Mercer thanked the Chamber of Commerce and MKR for the honor.

2018 Business of the Year
Monticello Drugs

Don Parrot announced that Monticello Drugs was the recipient of this year’s Business of the Year Award. He spoke about how Monticello Drugs is community minded and very supportive when there is an area of need. The new location is accommodating to all community members with the addition of the drive-thru. The new facility is evident of their dedication to improve and enhance the town and county.

The Bank of Monticello
2017 Business of the Year

“Two years ago the Chamber of Commerce started a new tradition by naming a Business of the Year. Our first two recipients Heartland Clinic of Chiropractic and Norton Industries were very excellent choices. They were both new businesses in this community and have contributed a great deal to this county.

“In support of my nomination, I would like to give you a brief history of my nominee.

“On March 22, 1892, a citizens meeting was held at the Jasper County Courthouse in Monticello, Georgia to issue stock at $100 per share, to establish Bank of Monticello. The only bank in the county, the Bank of Monticello became a State Depository in 1894. In 1892, J.H. Kelly was elected Vice-President and Director. His great-grandson, Don B. Kelly, is the current Chairman of the Board, and his great-great grandson, Bruce Kelly, currently serves on the Board of Directors.

“J.H. Kelly, M.S. Benton and Taney 0. Benton were among the directors elected to the First National Bank board. In addition, E. Clyde Kelly, son of J. H. Kelly and Dan Gunn, grandfather of current board member W. Dan Roberts, also served as directors.

“In 1963, First National Bank of Monticello purchased the Hutchinson lot on Greene Street and constructed a new banking facility. The exterior of the building was modeled after Thomas Jefferson’s Monticello home.
“On February 10, 1964, the bank converted from a national bank to a state bank and changed its name to Bank of Monticello.

“In 1996, the Warren Building and the service station lot facing Washington Street were purchased for a new drive-in-facility. In addition, the building on Greene Street was renovated.

“Bank of Monticello continues to grow with dedicated employees and management. It is locally owned and operated and has kept the touch of a hometown bank. Bank of Monticello has continuously supported community events and projects which help to develop our community socially, economically and culturally.

“As you can see from this brief history of the bank, it has always been managed and controlled by Jasper County citizens and it continues that tradition today.”

The guest speaker for the meeting was Beth Eavenson, Region 5 Representative with the Georgia Department of Community Affairs (DCA).
In 2017, Monticello and Jasper County were chosen as a pilot community for a new DCA initiative. The DCA Community Design team came to our community to explore the range of technical expertise that they have to offer. For this pilot program, DCA asked communities to apply and identify an opportunity where DCA’s resources could help the community move in its chosen direction.

Mrs. Eavenson gave a presentation on the findings from the community assistance team’s visit to Monticello and Jasper County this past summer. During the evening the annual meeting attendees had the opportunity to participate by leaving comments on a “planning for our future card” offering goals, visions, ideas, thoughts and suggestions.

“We are proud of the partnership we have with the Georgia Department of Community Affairs and appreciate Beth for speaking at our annual meeting,” said President Pam Mayer. 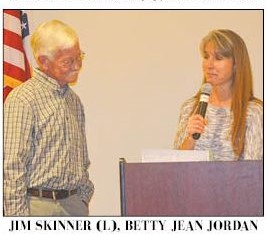 In nominating Norton Packaging, the Betty Jean Jordan reviewed Norton’s successful plant here in Monticello. The company that has had headquarters on the west coast since its founding in 1901, decided in 2012 to come to Jasper County. During the 2013 groundbreaking ceremony, Scott Norton said, “We were drawn here by the advantageous business climate, and we look forward to becoming an integral part of the community.”

“Norton has, indeed, become an integral part of the community and has had a phenomenal rate of growth. On March 24, 2014, the Monticello facility began production with a five year goal of hiring 42 employees. By June 2, 2014, Norton had begun operating 24 hours per day, seven days per week. And the end of 2016, Norton Packaging in Monticello has 66 employees. Sixty of the employees live in Jasper County,” the nomination form said.

Heartland Clinic of Chiropractic
2015 Business of the Year 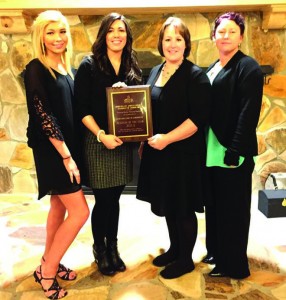 Heartland Clinic of Chiropractic was named the Monticello-Jasper County 2015 Business of the Year at the COC’s annual dinner meeting held last Thursday at Charlie Elliott Wildlife Center in northern Jasper County.  “No matter who it is or where you are in our great little town, when this business’ name is mentioned everyone smiles and starts singing its praises,” said Skip Davis, 2016 chair of the COC.

“This business takes the health of Jasper Countians personal. Their mission is to “Restore Health Naturally” and that is exactly what they do! You can witness the huge impact of this business just by watching the wide variety of patients in the often, full to capacity, waiting room.

“Testimonials abound from both young and old to the care and relief this facility offers to all patients,” said Mr. Davis.

“After normal business hours, you can find this staff educating the community through complimentary workshops, health and spinal screenings and Wellness for Women workshops. It is not unusual to find them anywhere from churches to business events sharing wisdom of how the body can naturally heal itself.

“The true value of this business is their investment in the people of this community,” said Mr. Davis.

“Monticello-Jasper County is truly a better place because of Heartland Clinic of Chiropractic, Dr. Lyndsy Holman & staff,” is how Mr. Davis closed his remarks. Then, Dr. Holman thanked everyone and encouraged her staff to join her at the podium. Staff members include Shelby Parrish, Susan Denney and Cheri Shaw.

This was the first business to receive the designation as “Business of the Year” by the coc, and is the beginning of a new tradition as the COC plans to continue this category each year, along with the Citizen of the Year which has been a tradition for many years. The meeting is tentatively scheduled for January 24, 2017, and will take place again at Charlie Elliott Wildlife Center. For more information on the COC, call 706-468-8994. All businesses and individuals are invited to join. 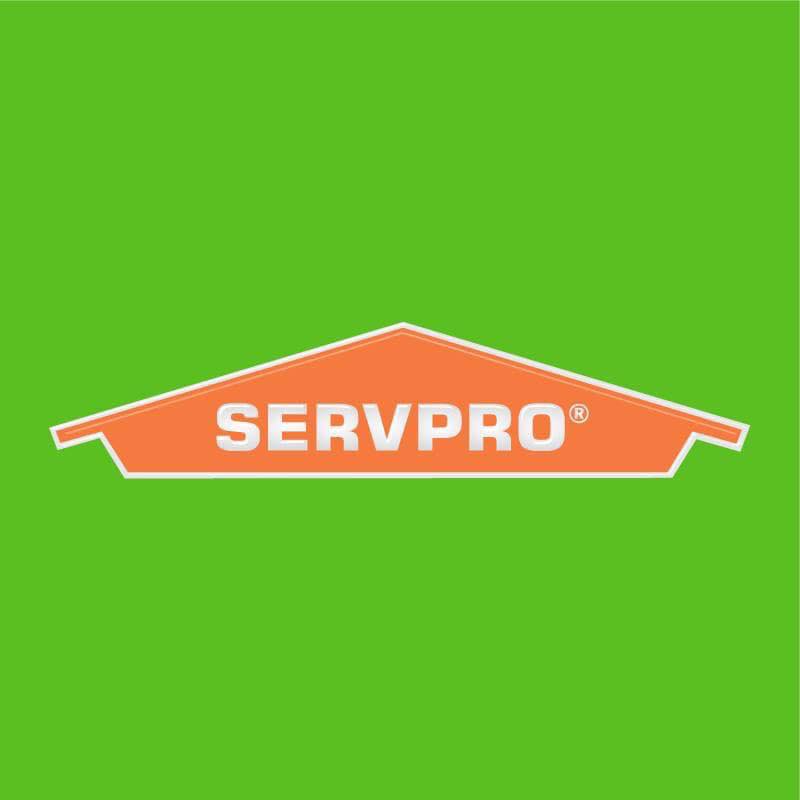