Amy Scroggs Is Citizen of the Year

Being a senior class and graduation adviser, she was supposed to head up a meeting at the high school last Thursday evening, so her family had to trick her to get her to the Chamber of Commerce Annual Meeting where Mrs. Amy Scroggs was named the 2014 Citizen of the Year.

A long-time dedicated high school business teacher, Mrs. Scroggs was nominated by several individuals, and was introduced at the annual meeting by the previous year’s Citizen of the Year, Jehan El-Jourbagy.

“Our Citizen of the Year is someone who is reliable, someone who always offers to help, someone who is family-oriented, church-centered, community supportive and school invested . . . someone who does not seek the limelight, but instead, always encourages others to step into the spotlight, to be their best, to set goals and to learn how to reach those goals – to reach goals with skills, no doubt, taught by this person.

Our Citizen of the Year is a lifelong citizen of this community. She was a cheerleader, and now, she cheers on others to success,” said Ms. El-Jourbagy. And, on one nomination form it quoted Mrs. Scroggs oft-hears phrase, “I bleed purple” referring the purple Hurricane and the school they represent.

“She graduated in the top 10 of her class from Monticello High School in 1987, and received a degree in business education from Georgia College in 1992. During college, she worked with The Monticello News and the Board of Education sharing high school news and writing articles for the newspaper.

“She is also a musician. She plays piano and organ for the Community Christmas Cantata, is the church organist for the Monticello Baptist Church and often provides music for weddings and funerals,” Ms. El-Jourbagy continued with Mrs. Scroggs’ bio.

“She doesn’t complain. She just does what needs to be done, and I think most of her co-workers and administrators will admit, if they need something done, she is the one they go to,” one nomination said.

Ms. El-Jourbagy went on to say that many people in the room probably can tell a “go to” Amy story. She’s just that kind of person.

Other quotes from her nominations included:

“Few people in Jasper County have impacted the lives of so many.”
“She is ready and willing to help the youth at school above and beyond any expectations.”

Mrs. El-Jourbagy concluded her announcement of the Citizen of the year by saying, “She loves her kids at school as if they were her own . . . I couldn’t think of anyone else who is more devoted to Jasper County and the kids of theses families than she is.”

She has been named a Teacher of the Year, a system teacher of the year, a STAR teacher, and she is someone I have always admired. The wife of Gary Scroggs and the mother to two children, Garrett and Alison, let’s please show our appreciation to our very deserving citizen of the year, Amy Scroggs.

And, perusal of the nominations shows all the good thing said about Mrs. Scroggs will not fit into this space. One nominator said:,
“Amy Scroggs is a lifelong resident of Jasper County…. She has remained in Jasper County and given herself to her community, her school, and her church. Few people in Jasper County have impacted the lives of so many.”

Another said, “For the all around good that she does for the community as well as the image she projects…she deserves to be Citizen of the Year.”

Mrs. Scroggs was very surprised, especially since her family told her that her sister-in-law, Kim McMichael, was receiving the honor.

Following the presentation of the Citizn of the Year, a My Cousin Vinny skit was held, bringing much laughter to the room.

Then, guest speaker Rebekah Snider with the Georgia Department of Economic Development as the Historic Heartland Tourism Project Manager, spoke to the group about economic development and especially tourism and the dollars it brings to a community.

After dinner and before the introduction of the Citizen of the Year, a brief business meeting was held during which new and returning Board of Directors members were introduced. New members approved include Carol Atkinson with Jasper County Health Services, Leah Dumas, self employed Avon representative, Dana Leach with Dana Leach Realty, Tony Lewis with Lewis and Malone Heating and Air, Tracey Nelson with the Bank of Monticello, and Tibia Williams with State Farm Insurance.

The 2014 officers will serve again in 2015, and they are Kathy Mudd, chair; Skip Davis, vice-chair; Carol Ann McMichael, treasurer, and Linda Simmons, secretary.

Story by – The Monticello News 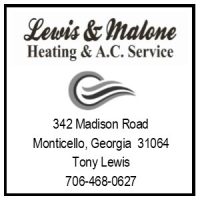